Before the printing of books (in the west) sometime about 1473/4, every book was handwritten . . . with a quill pen, crikey, fountain pens not to be invented until the 19th century . . . and, no popping down the shop for some ink!

For almost a thousand years books were written in Latin, a language widely understood throughout Europe. Writing in English was much less important and much less widely read. However, as English grew in prestige it was used more often and there are some fabulous examples in Designing English on until the 22 April in the Weston Library, Oxford.

It is worth seeing, not just for the medieval manuscripts in the main exhibition, but also to see the display of current, recently created artists' books inspired by those manuscripts. 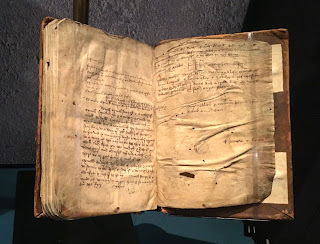 The most 'ordinary' of books this, a medical book of the late 1400's. Remedies and charms scribbled on the flyleaves in scruffy and wonky handwriting. But these are magic words, with the power to heal. It includes a spell, with the instruction to write +loy +eloy +zedeloy onto a loaf, butter or an apple as a cure for toothache! 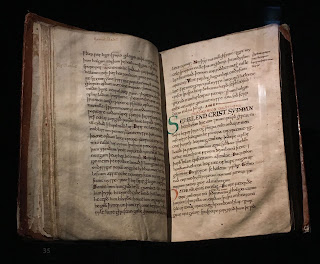 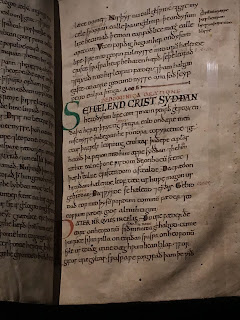 Composed 990-995; copied second half of the 1000's at Worcester Cathedral. I think the shape of this writing is adorable . . . the lines are widely spaced for ease of sight-reading, and large coloured letters mark new sermons. 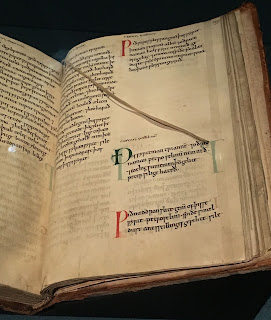 A herbal, copied sometime mid 1000's, the scribe having left spaces for someone to illustrate at a later date. Who knows what may have happened so that it did not get done . . . 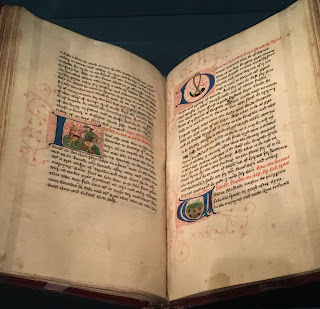 Stories are painted inside these initials in this English guide to hunting, more entertaining than informative. 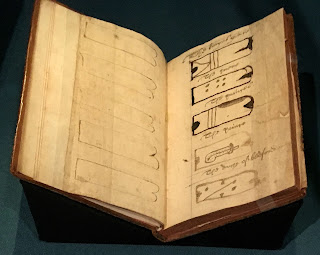 A manual for swan upping copied between 1516 and 1539, with beautiful abstracted forms symbolising the brands used on the beaks of swans. 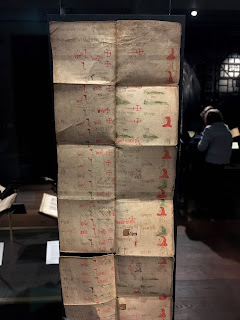 A book which folds into a tiny square, about 55mm wide, perfect for folding up and carrying about to consult. Pictures show when it's lucky or deadly to do risky things like getting married, or letting blood. 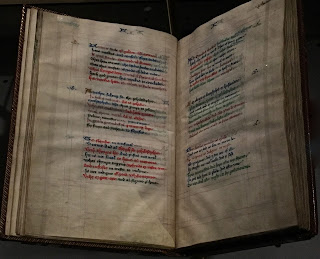 Verse composed in the late 300's or early 400's and translated between 1439 and 1443 and designed as a gorgeous gift for a duke. The scribe uses multiple coloured inks to highlight fiddly rhymes and different sounds, resulting in wonderful patterns and shapes on the page.

Redesigning the medieval book - artists' books inspired by the manuscripts on show.

When leaving the main exhibition rooms of Designing English, turn to the left and head for the vitrine in the main entrance hall to see a selection of books made as a compliment to that exhibition. 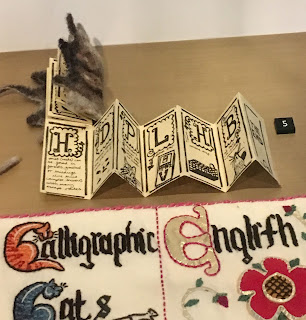 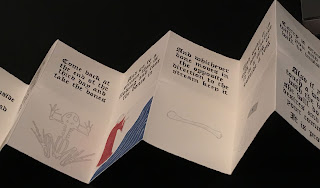 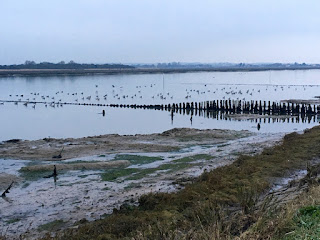 Mavina Baker @ Teacup Press
Teacup Press loves letterpress, printmaking & poetry, books & bookbinding. Working Under the imprint of Teacup Press, a small print studio I established to reflect my increasing interest in book arts, I design and make books and prints in small, limited editions and as one-offs, that are hand-printed and hand-bound. It's a slow process which involves a lot of thinking and proofing and innumerable cups of coffee.